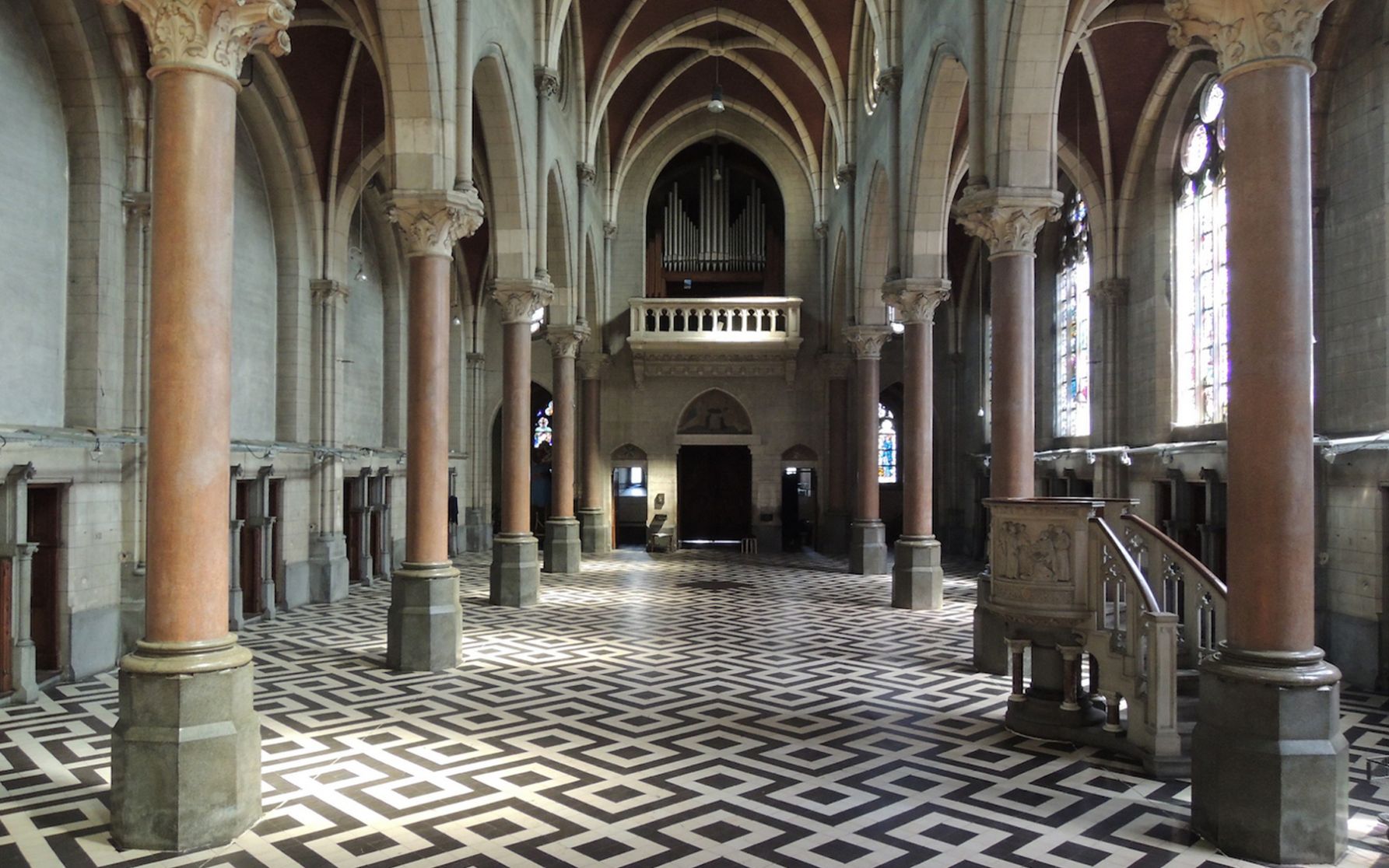 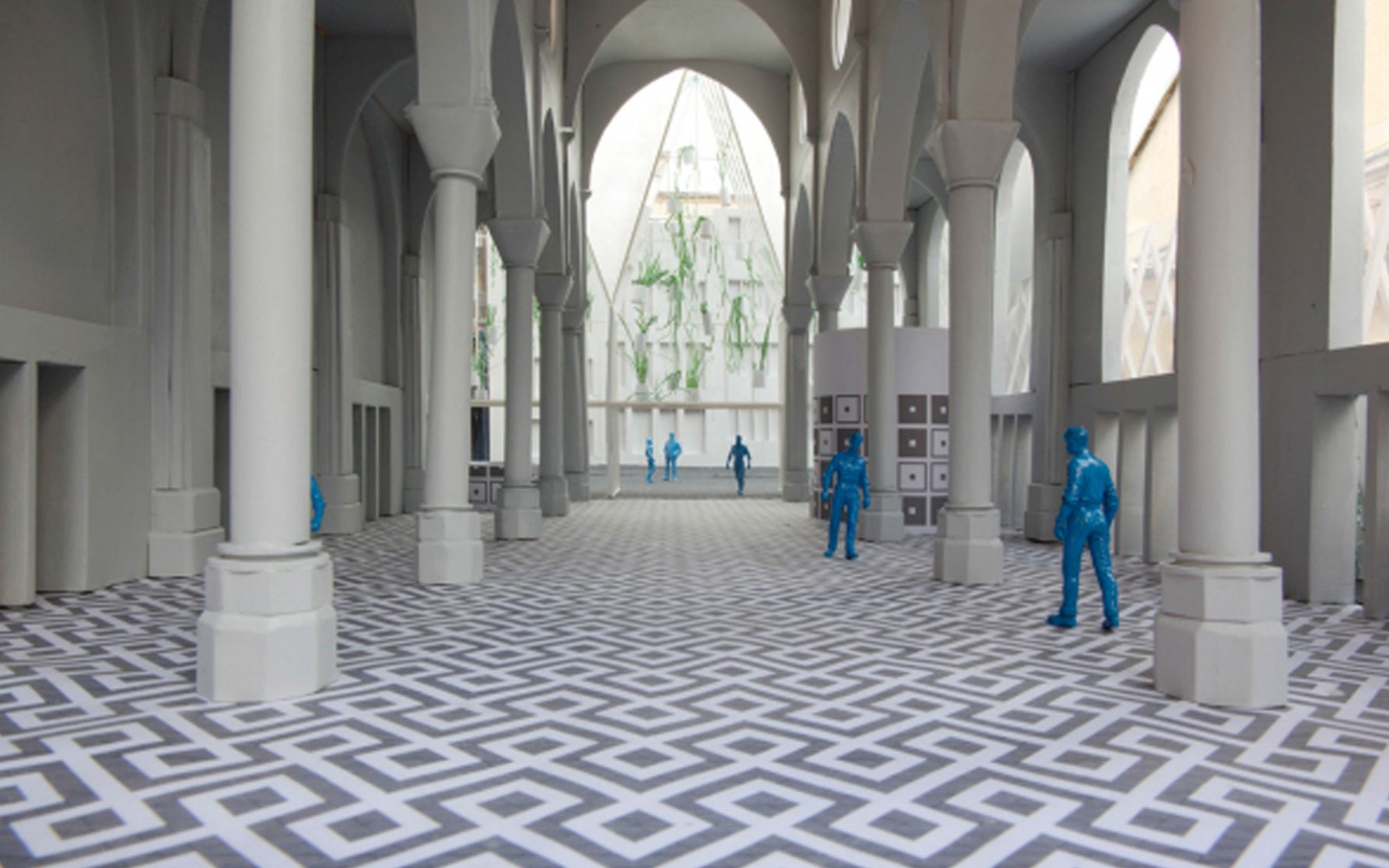 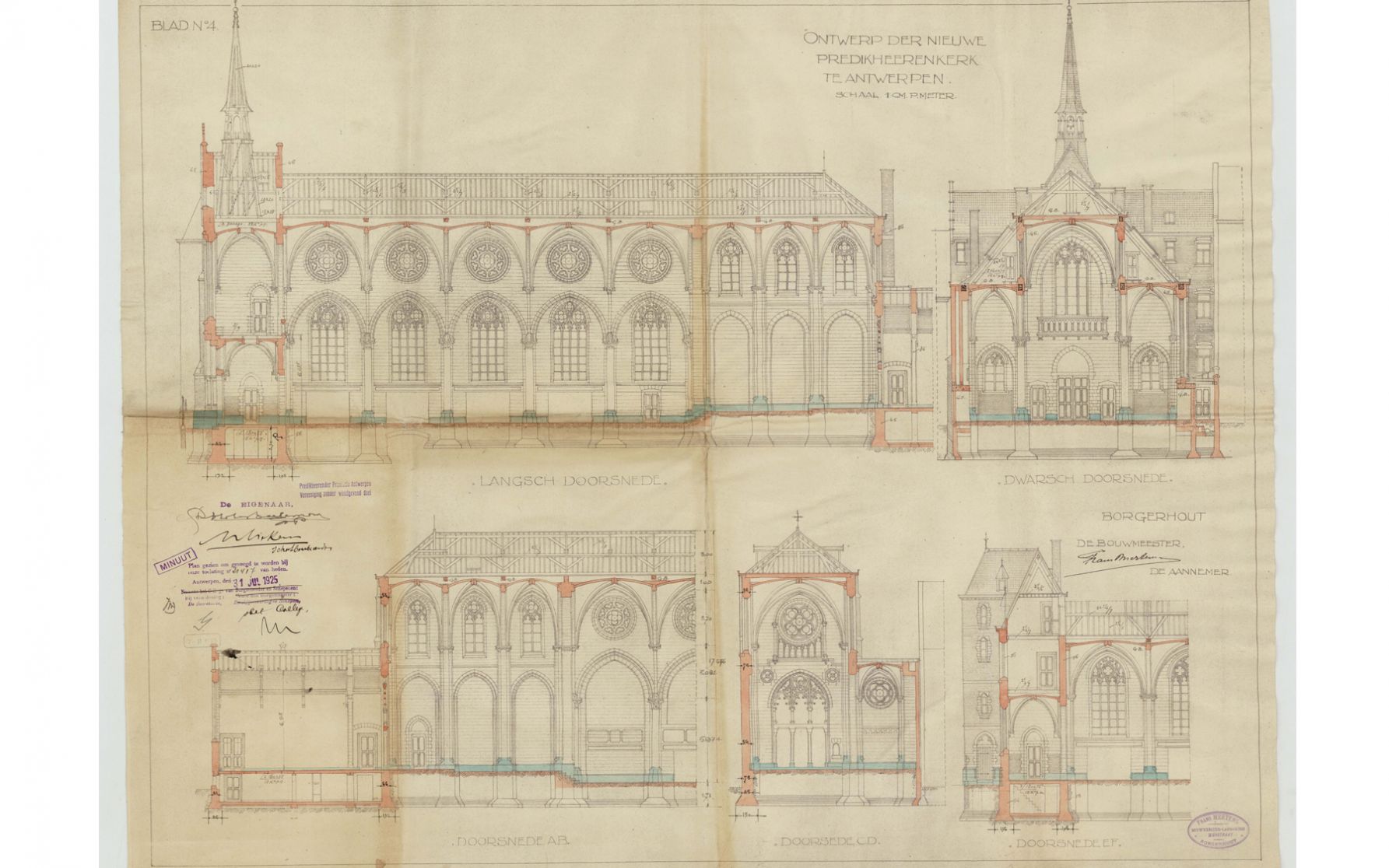 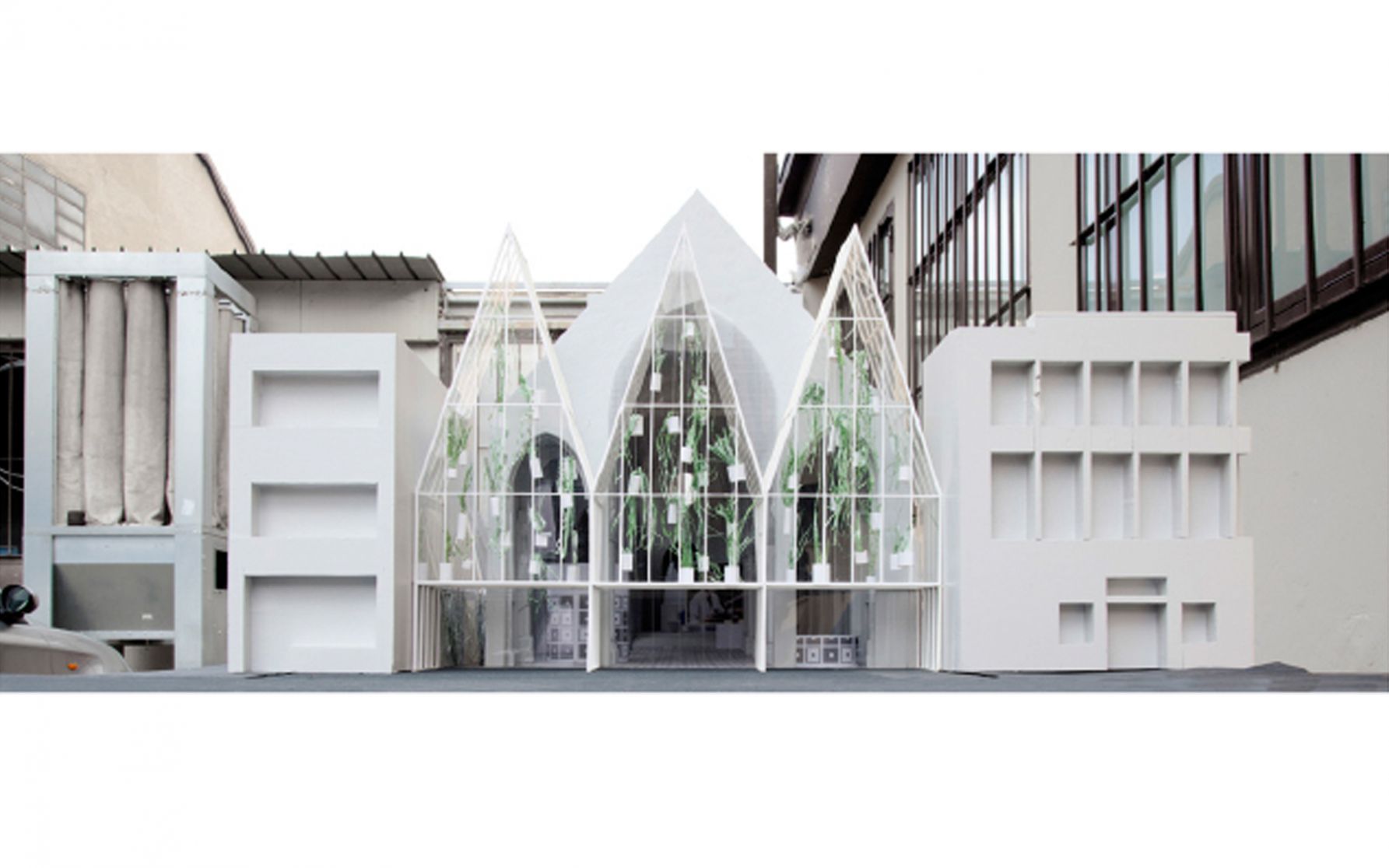 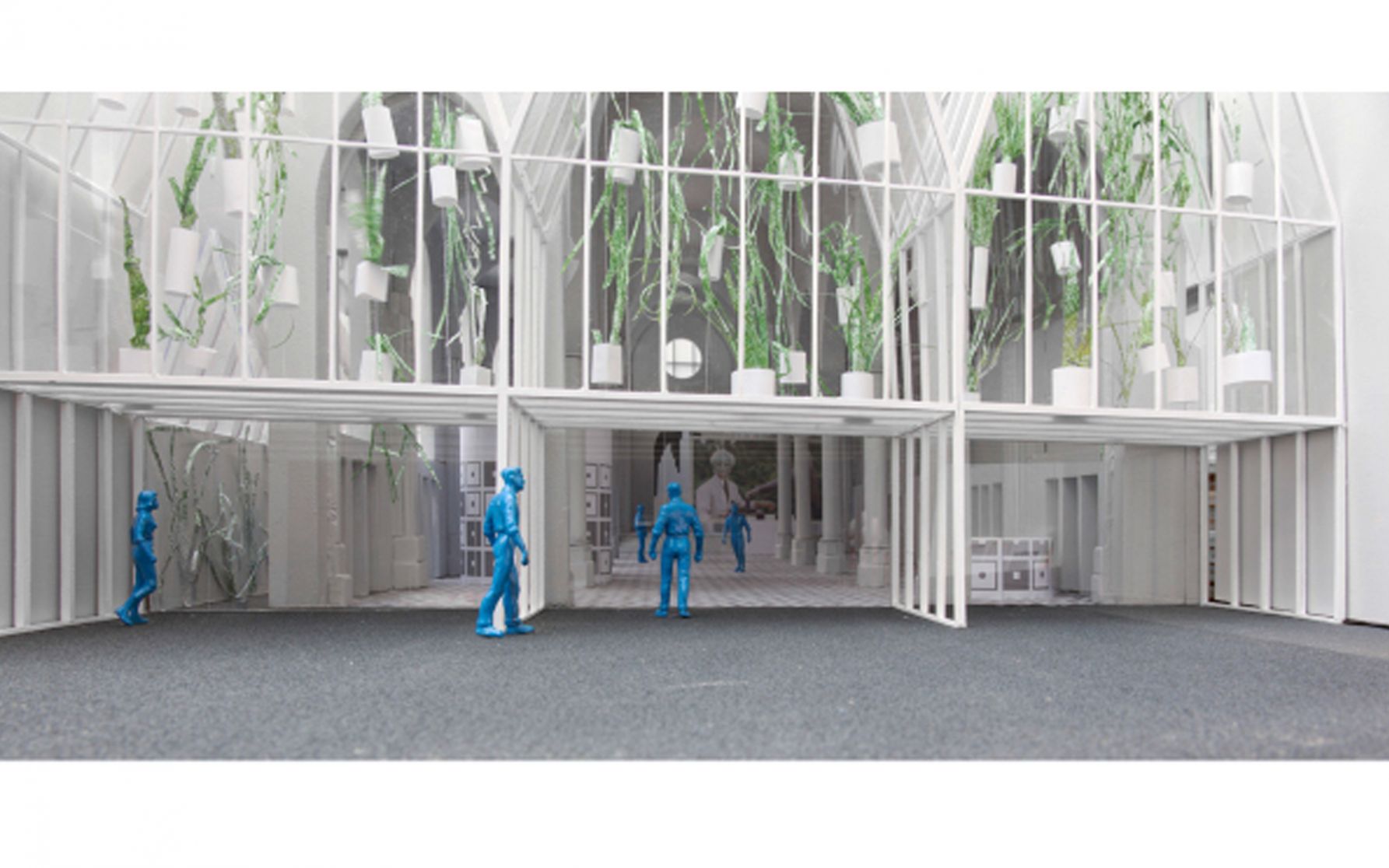 The QVIT area is a residential neighbourhood just outside the medieval centre of Antwerp, near the municipal border with Borgerhout. The area is separated from the centre by a classic nineteenth-century infrastructure that includes the railway station and the zoo. This large-scale urban infrastructure gives the neighbourhood considerable potential, but also creates a problem due to a lack of public space and small-scale buildings.

The Dominican monastery in this neighbourhood was a walled-in, closed-off complex that distanced itself from the world. The goal of the Open Call is to transform the private monastery typology into an accessible, multifunctional meeting place dedicated to innovation and knowledge acquisition.

The proposal deems the introverted nature of the monastery as a positive quality: the monastery is an oasis within the chaos of the modern city. At the same time, the site's isolation poses a serious threat to the desired public function of the new community centre. For this reason, the Dominican monastery will be made transparent for the city, by literally revealing its interior to the outside world. An urban passage with new entrances in Ploegstraat and Provinciestraat will make all parts of the community centre freely accessible. The winding passage will be a light-filled structure with a glass roof – like a system of greenhouses containing a diversity of plants, flowers, and fruits – which will create a pleasant and unexpected environment with sunlight filtering down from above.

On Provinciestraat, the heavy, sombre façade and the disproportionate bell tower of the old church will be replaced with a new glass façade that marks both the beginning and the end of the passage. The church will serve as a multifunctional hall in which conferences, seminars, events, concerts, and exhibitions can be held. The new façade will allow for a larger, covered public square outside the entrance, which is essential to the desired function.

The transformed front structure will be more in line with the adjacent houses in terms of rhythm, size, and shape. The transparency will literally reveal the accessibility and openness of the new facilities for all categories of users. The neo-gothic interior of the church will be visible from the street and will allow rays of light to filter into the church. This light will be refracted by a screen of vegetation in a vibrant shade of green. A variety of plants in suspended pots will be attached to the conservatory structure via a lifting system. The pots will be equipped with LED lights that will illuminate the entrance to the church at night.

The new façade of the old church will double as a kind of buffer zone in the form of a conservatory from which the thermal and acoustic conditions of the church area can be regulated. In the summer, the spaces can be ventilated by opening the windows, while the greenery will help to temper the sunlight. In the winter, the warmth from the conservatory will reduce the amount of conventional heating required.

A vertical garden of climbing plants will guide visitors through the passage and towards the new community centre. Halfway through they will enter the monastery's open courtyard, which will be divided into two triangular halves: a paved area for multifunctional use and a garden area with wild vegetation. The garden will retain much of its current vegetation, which will also extend onto the roof of the courtyard. The small patio will become a kind of secret garden; a classic hortus conclusus with medicinal plants as a nod to the original monastic atmosphere.

On Ploegstraat, the building project will be even more prominent. The brickwork façades together with the buildings and the conservatories of the zoo will determine the character of the street. An open gate will be constructed on the eastern edge of the site. From this gate, the new passage will be fully visible up to fifty metres into the plot. The mortar of the buildings on Ploegstraat will be restored as well.

The design proposal aims to respect the architecture of the former Dominican monastery as much as possible, without jeopardising future transformations. The new community centre will follow a simple schedule that will make it easy to adapt to different future scenarios. The conservatory passage could eventually be merged into the zoo's existing greenhouses, east of the community centre. By making the internal passage publicly accessible, the interaction between the neighbourhood and the community centre will be intensified. Passers-by will be invited to rediscover the former monastery complex and will feel intuitively drawn to participate in the activities organised by the community centre. And the user-friendly nature of the site will attract a new audience.