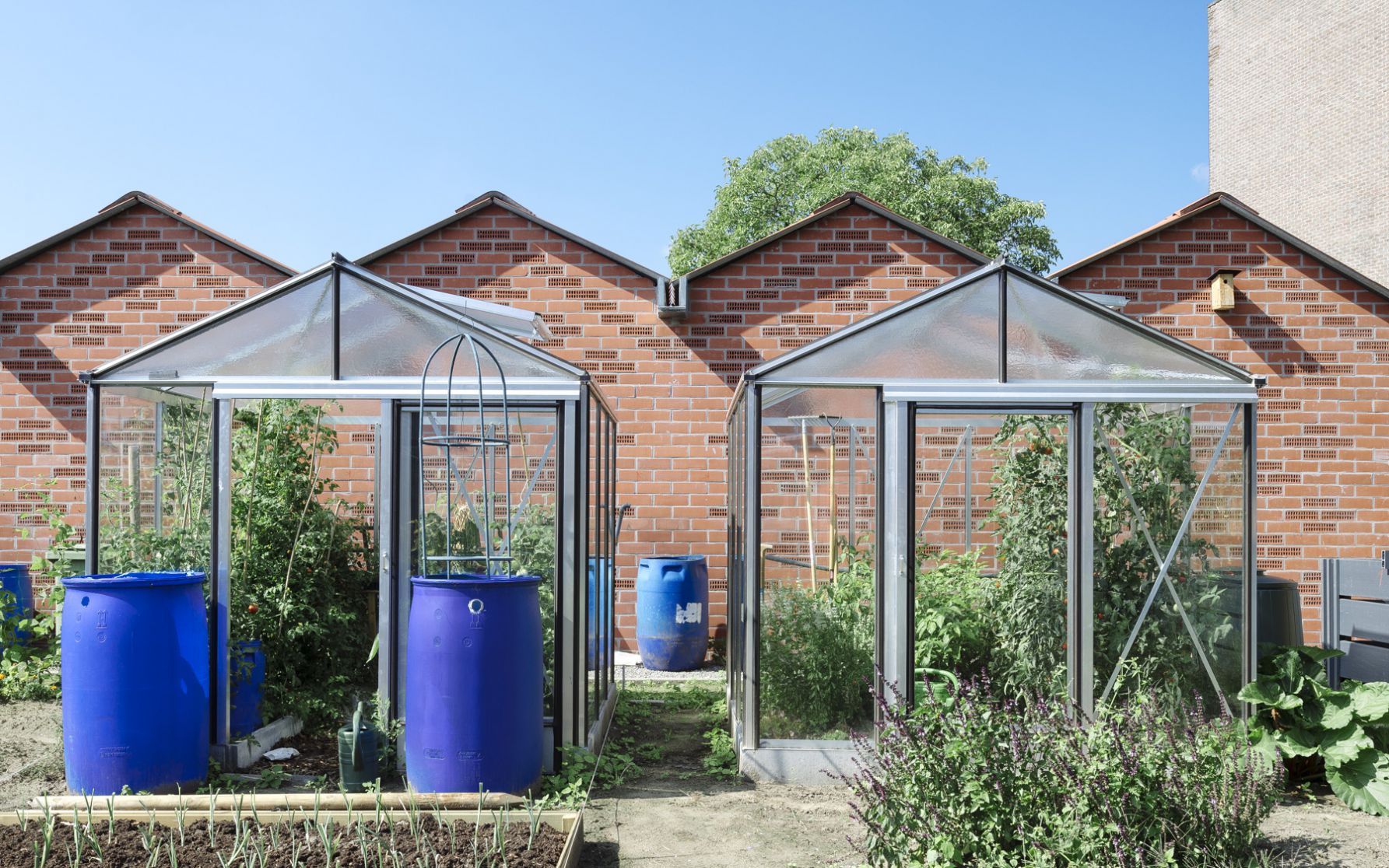 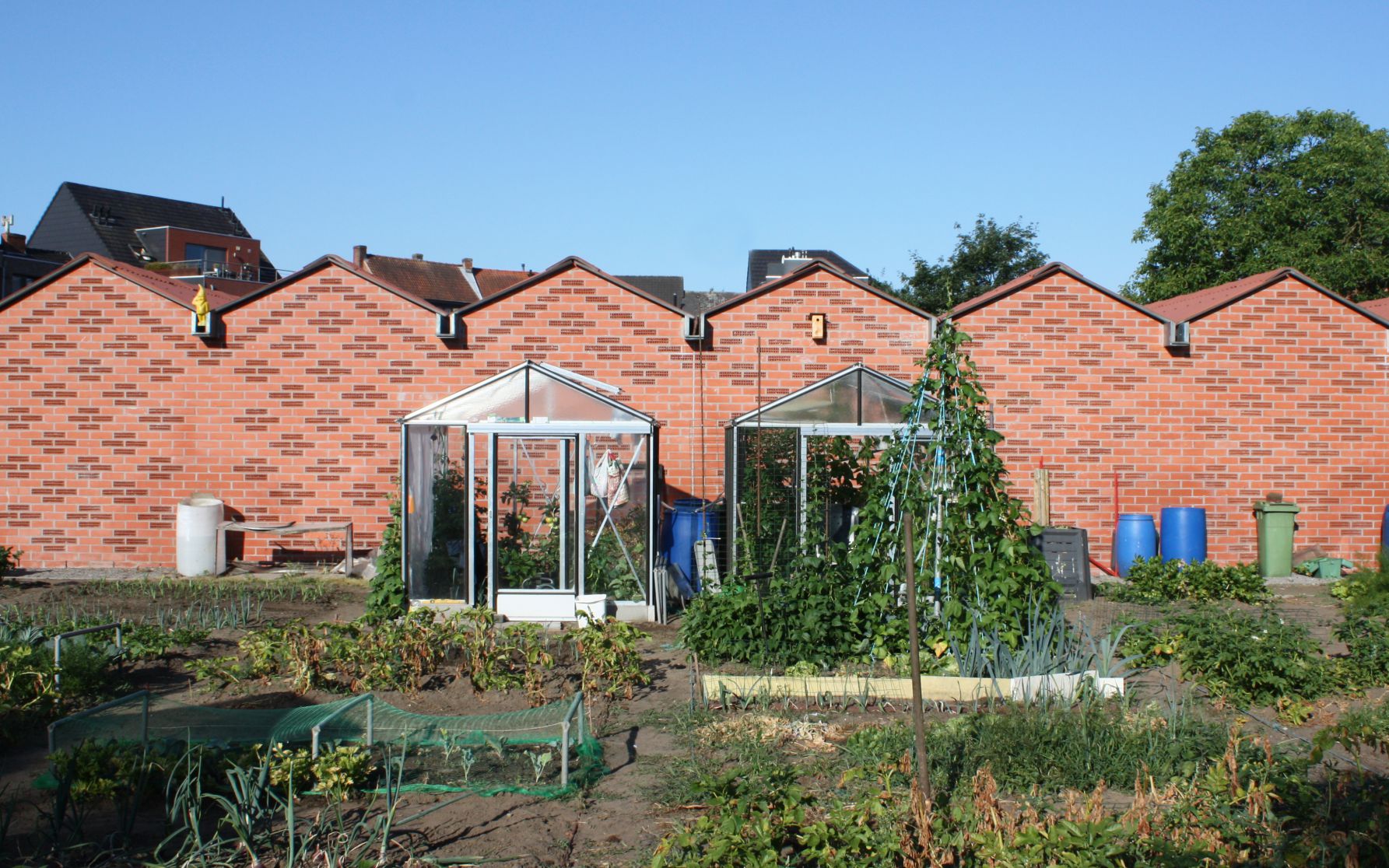 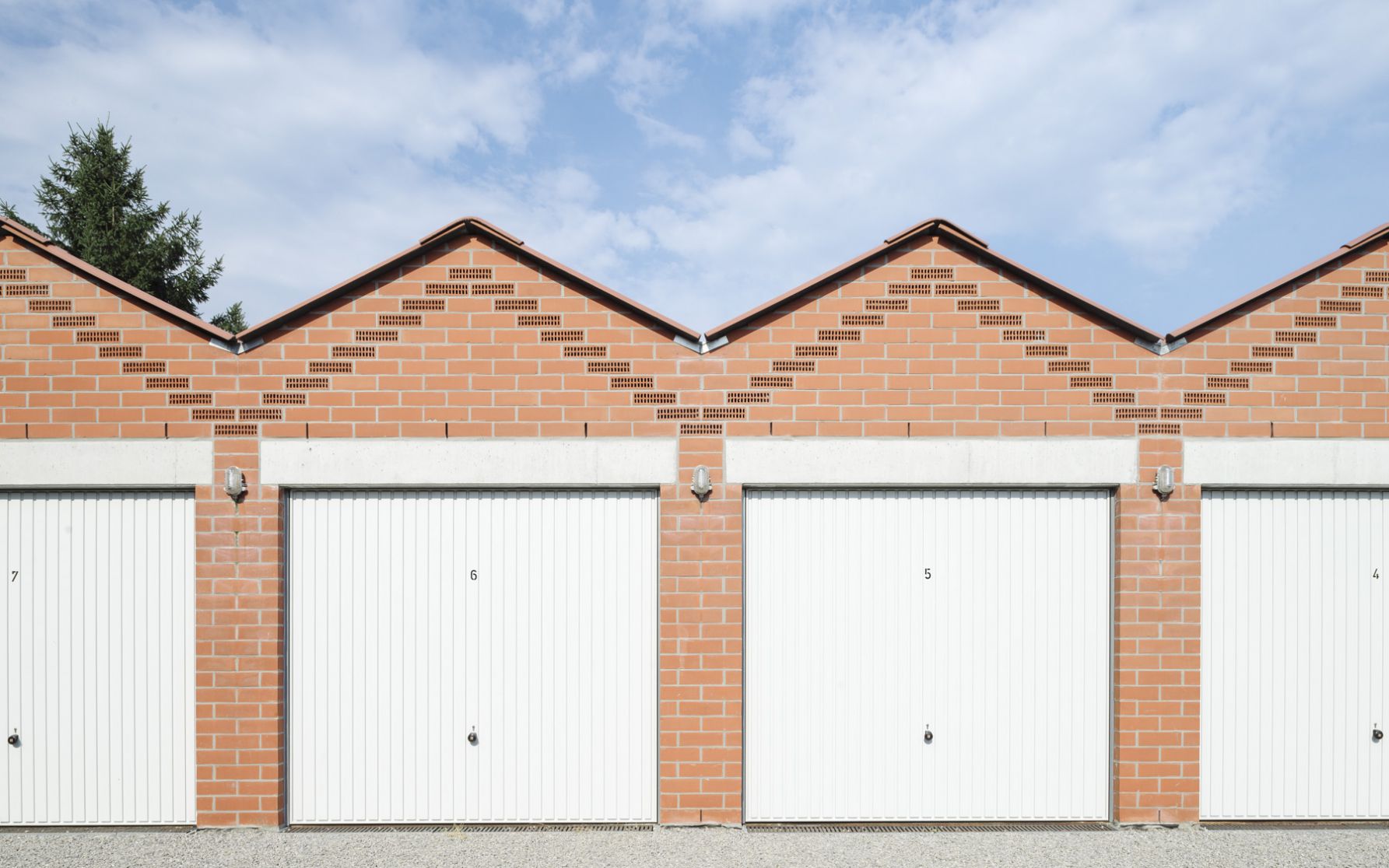 At the mouth of the Meuse-Scheldt delta in the Albert Canal lies Herentals. We are in a small courtyard within walking distance of the medieval city centre. In the immediate vicinity is a great example of ‘wild living’[1]: townhouses from the early nineteenth century alternate between farmhouses and social housing from the 1990s. The courtyard is flanked on one side by a green fortress, behind which lies a private cloister. It is an unorganised conglomeration of open and occupied space that is neither urban nor rural.

You would expect this area to be a web of green, with outbuildings near the rear façades of houses, landscaped gardens, and a row of garden sheds culminating in a more informal zone sometimes used as a veggie patch but more often left barren.1 This description would have been accurate three years ago, when the courtyard was indeed a hotchpotch of shacks. Glass conservatories, timber structures, Plexiglass storage sheds, and cement slabs made this an incoherent whole in a sea of privatised vegetable gardens. The degree of individual appropriation was high; a common site in Flanders.

When you visit the area today and take the time to sit on one of the benches installed by local residents, it’s clear that there’s much more than meets the eye. The gardens are no longer overgrown. There is no cacophony of sheds. The paradox between city and country that Paul Vermeulen describes as a longing for the countryside – only reflected in the house, behind which the stereotypical rural landscape disappears[2] – seems to be embraced here. The overgrown private gardens have made way for a seemingly collective world that arouses wonder.

The vegetable gardens are clearly organised. Narrow paths divide the sea of green into different patches, aligned with nine new garages. The materialisation of these nine volumes emphasises the relationship between the gardens and the built environment. The shape of the stone buildings seems to have been inspired by the eight glass conservatories positioned two by two in the gardens. The exposed bricks that form the rear wall of the parking garages have been turned in such a way that they form a façade or even a backdrop to the gardens. The parking area is obscured. A new passe-partout was created on this side. The designers’ decision to deal with the form and material in this way indicates a commitment that goes beyond mere constructive logic. The décor of perforated quick-build brick ornaments, corrugated red iron roofs, and zinc spouts create rhythm and rest. In one of the gutters, a cheerful yellow garden gnome watches over the harvest – one of the many signs hinting that this area is being used to the fullest. A garden gnome belongs in a garden. Even if it’s yellow, stuffed in a gutter, and forms a ‘V’ with his pointer and middle finger, suggesting the political approval or disapproval of gardeners, much like the gnome on display in the mayor of Antwerp’s cabinet. Blue and green rainwater tanks are positioned under the gutters. A home-made wooden birdhouse hangs from the middle of the roof, housing a noisy inhabitant. Here and there the first tomatoes are turning from green to red. Rhubarb, pumpkin, and courgette compete for the most beautiful leaves as climbing plants wind their way up improvised carousel constructions. There are professionals at work here.

The residents are relieved, as the original plan was for the gardens to make way for twenty new garages to reduce parking congestion in the neighbourhood. The inner courtyard, which was until then visually expansive, would be parcelled off and paved. The social capital that had developed organically over the years would make way for individual storage units. However, what the owner saw as decay, the designers saw as a shining beacon of opportunity. The collective use was preserved and reframed. Instead of twenty garages, there are now nine, which is twenty percent of the surface area instead of a hundred. The possibilities for reusing the open space were reconditioned and restructured. The water collected from the corrugated iron roofs is used to feed the garden's irrigation system. The garages serve as both a parking spot and a garden shed. The division of the gardens was based on the structure of the volumes. The process of appropriation began immediately, continues automatically, and is much greater than it was before. Through use, the beauty of the collective memory that existed here was preserved.

In this case, the focus on use and appropriation began with preservation. The design process starts the moment an issue is raised. Design can also mean convincing the builder to build less or not at all. As architects, our job is to know when to create space and when to leave space as it is.