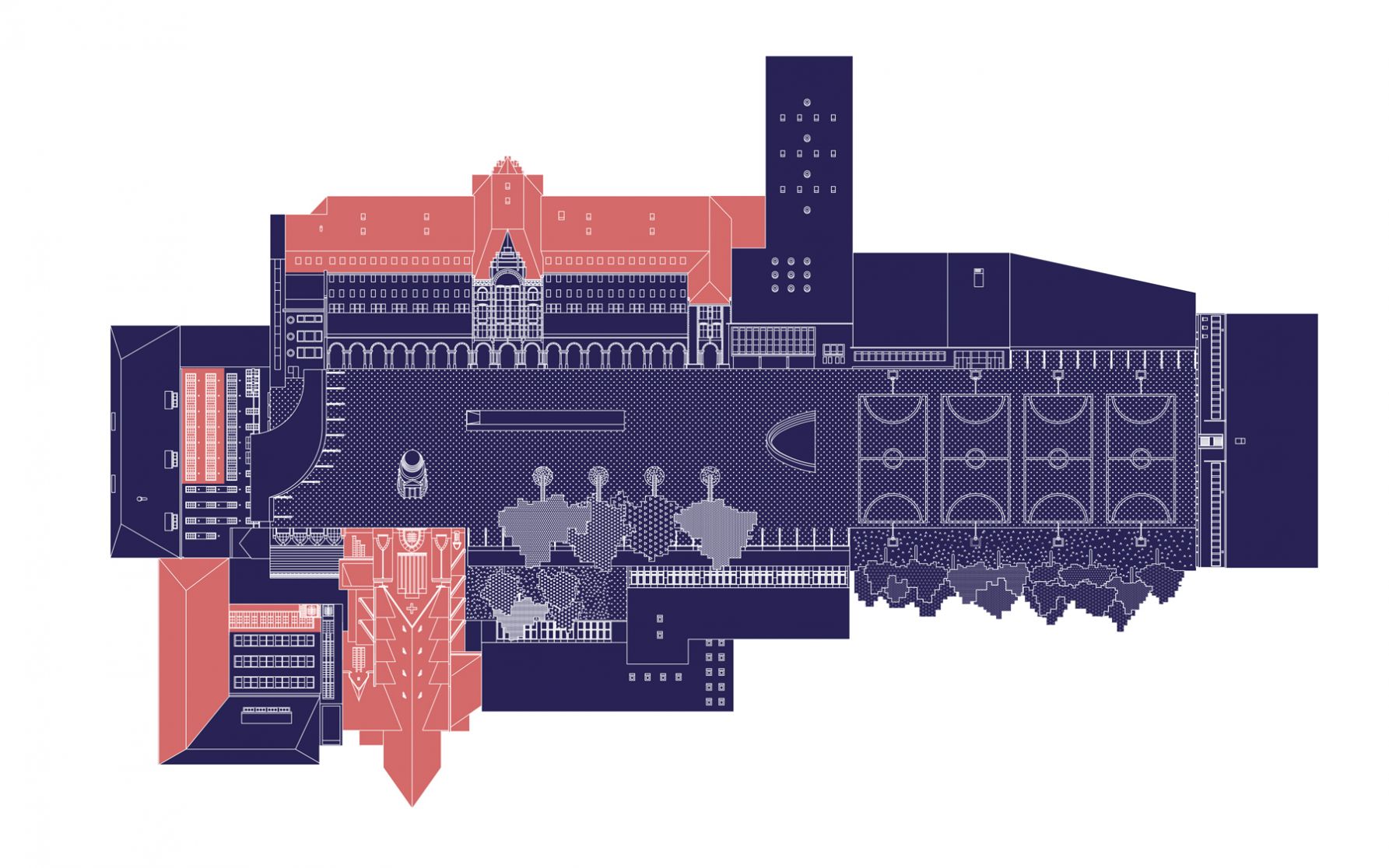 There is a lot of excess in our existing use of space: built and unbuilt space that is either not being used, or not properly being used. Space that hovers between designated and undesignated, visible and invisible. Space that is created consciously and subconsciously. This is what we call spatial waste.

Vacancy is an example of spatial waste, whereby space is being unused. Due to this clear lack of use, people tend to see it or become aware of it over time. A result of this awareness of spatial waste is that different tools have been developed to help identify vacant buildings. There are various policy measures to encourage owners to reactivate unused space, either with or without the necessary investments.

Wanderspace, on the other hand, is underused spatial waste. It is often concealed by inadequate use as a result of changing spatial needs or different needs, for example. There is a lack of use, with the space hovering somewhere between purposeful and purposeless – the latter being harder to detect than space that is being utterly unused. In many cases, people are completely unaware of this lack of use. As a result, there are virtually no measures to help detect and activate wanderspace.

Wanderspace arises with the insufficient use of space in a given area and/or time. A distinction can be made between spatial and periodic underuse.

Spatial underuse is characterised by the inefficient use of space. In this case, the space is bigger than the spatial need, resulting in underutilisation. Examples include industrial buildings with half-empty warehouses and homes with far more bedrooms than residents. There is too much space, as measured concretely in number of square metres. Periodic underuse is characterised by inefficient use over time. In this case, a space is not being used within a specific timeframe. Examples include classrooms that are not used in a specific period (at night, on weekends, during holidays) and car parks that are only used for events and remain empty the rest of the time. This can be measured in a specific unit of time. There could also be an overlap of both categories: certain areas are used to their full potential at specific times and left vacant at others. This is known as periodic spatial underuse. Wanderspace can manifest itself at different levels, ranging from an underutilised room to entire regions that could be more efficiently densified. In order to address these different levels, in 2018 we started to investigate the underutilisation of space at a regional, district, site, and building level.

Wanderspace is built and unbuilt space that is present everywhere and nowhere, and that hovers between conversion and returning to nature. This is space we have all created together, but are no longer aware that we possess. Working on this awareness is an important focal point of this research study. It may very well play an important role in the European goal to become climate-neutral by 2050. The further use of open space is detrimental and undermines this noble objective.

Apparently we find it harder to deal with excess (space) than scarcity. We are programmed to accept scarcity and still cherish the myth of abundance and ecological balance as described in stories about paradise. This is why it's so hard to curb our consumption. When it comes to waste management, we are a frontrunner in Europe, perhaps even the world. Smart use of wanderspace calls for a similar collective vision and focus.

The need for a spatial tidying up is becoming urgent in Flanders. Society is gradually realising that we are consuming space at an unsustainable rate and that our attitude is not future-proof. In this respect, shifting our focus to the use of existing space is becoming increasingly important. Until we expand our view on how space can be used, the amount of wanderspace will only increase. However, the solution will largely lie in reorganisation and making more efficient use of what we already have.

Discovering wanderspace and doing something about it is a conscious choice that demands a conscious effort. The decision to reactive wanderspace can minimise the pressure to create new space. Identifying and researching strategies for dealing with this wanderspace is now being put on the agenda. Think of it as a spatial waste policy; spatial tidying up as a design brief.

The leaflet was the first step in a new research process that will be rolled out over the next few years – a process that will require involvement from all involved players in order to find and implement good solutions.

In 2018, RE-ST was awarded the BWMSTR Label 015 by the Flemish Government Architect's Team for this research project.