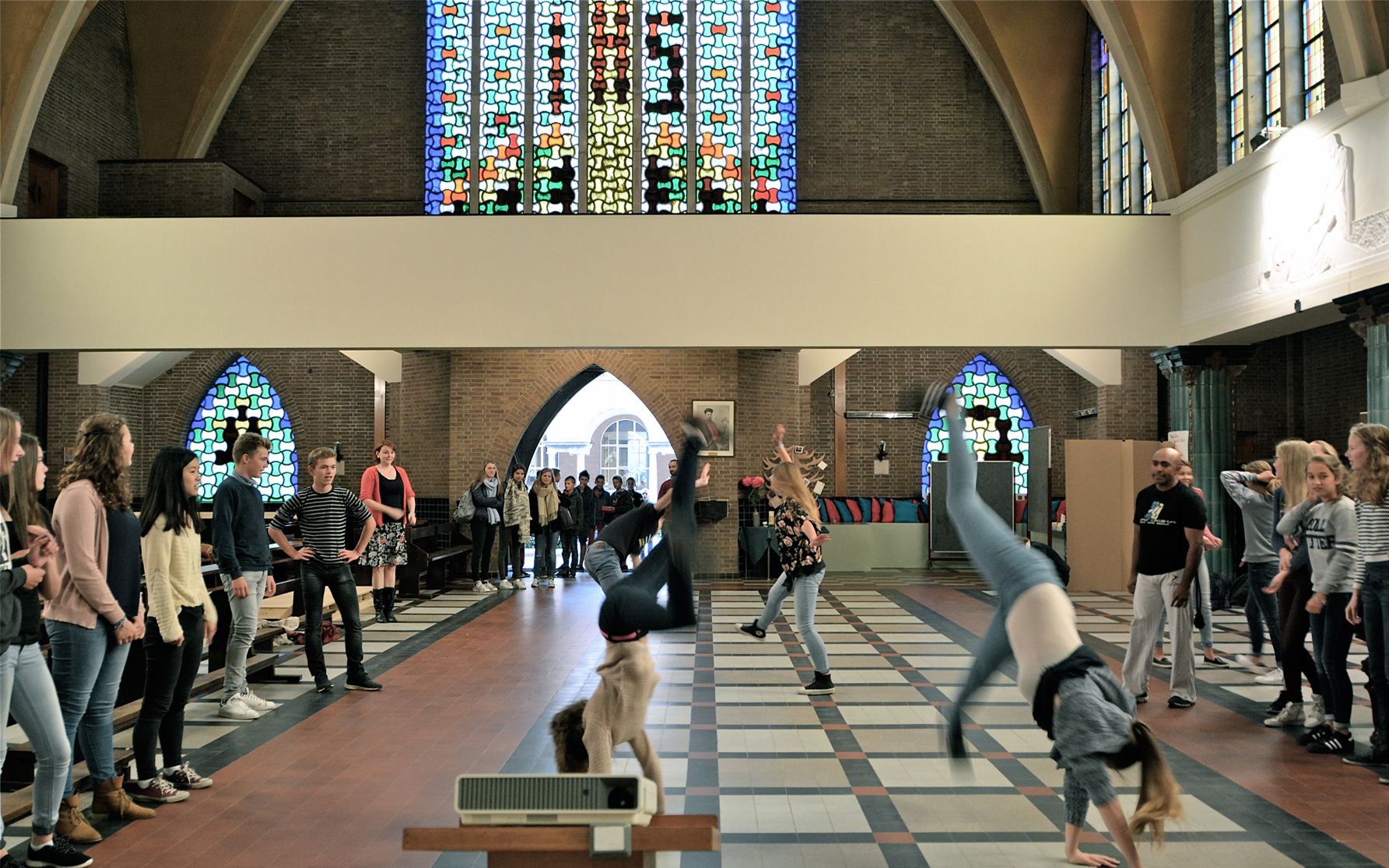 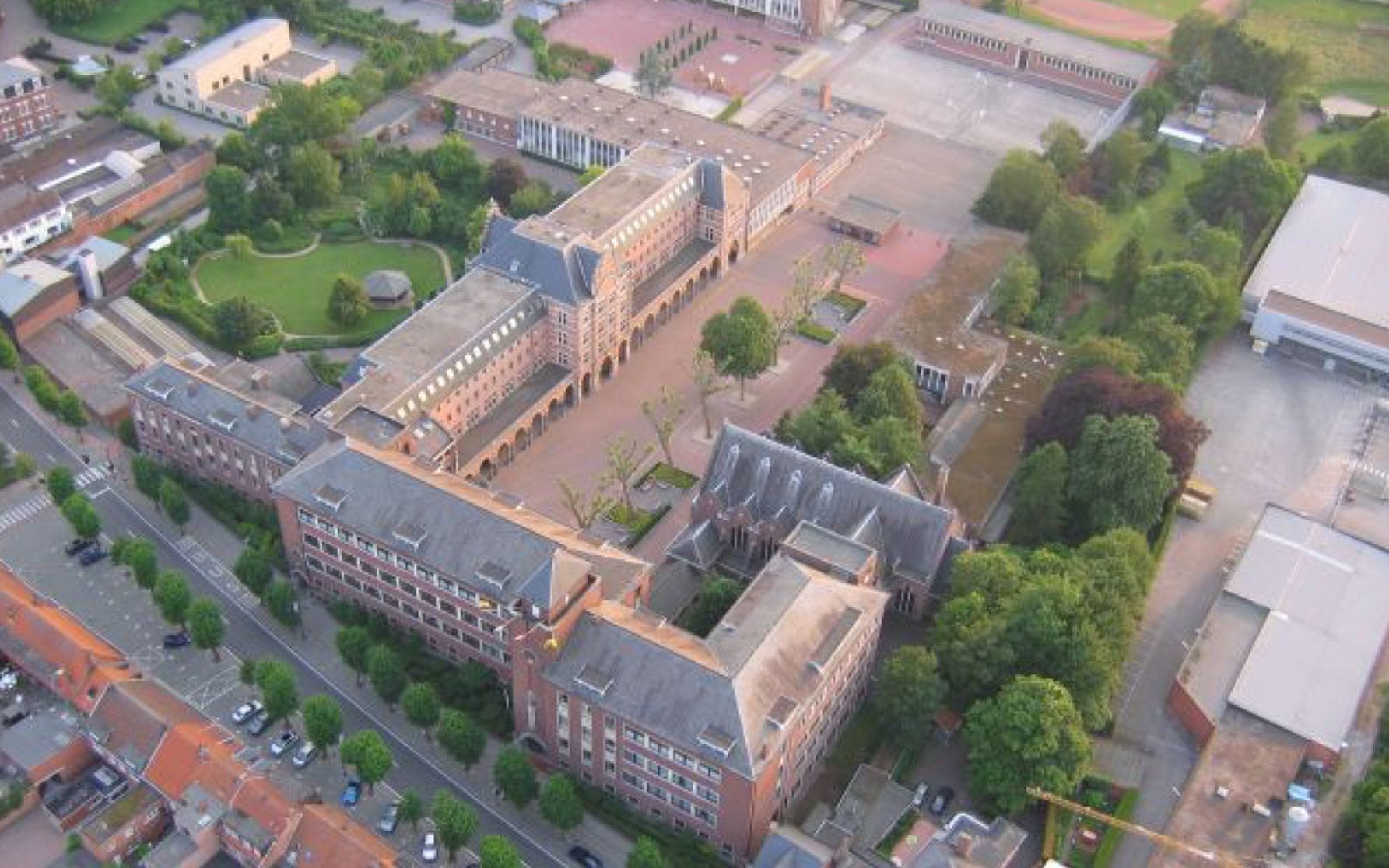 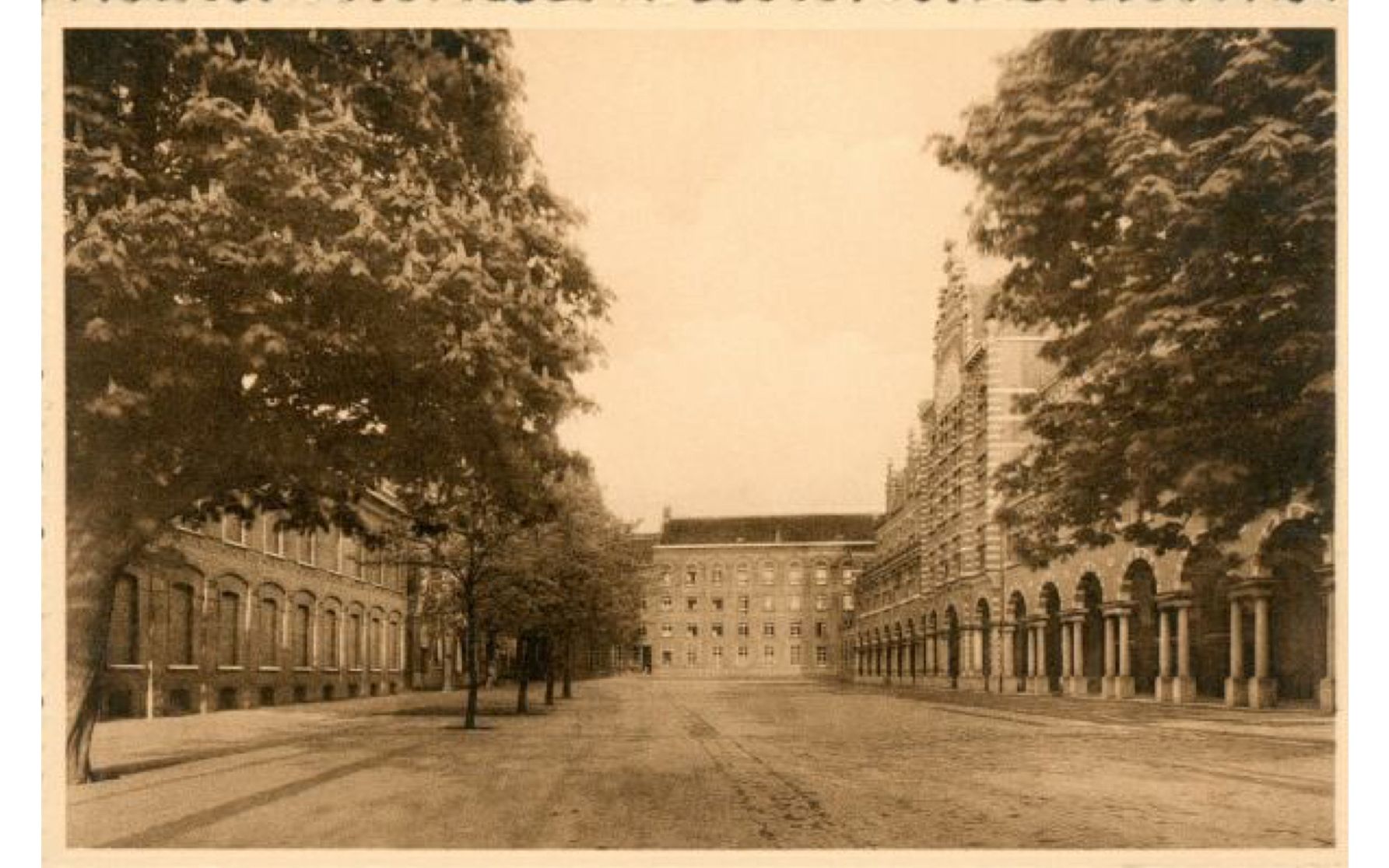 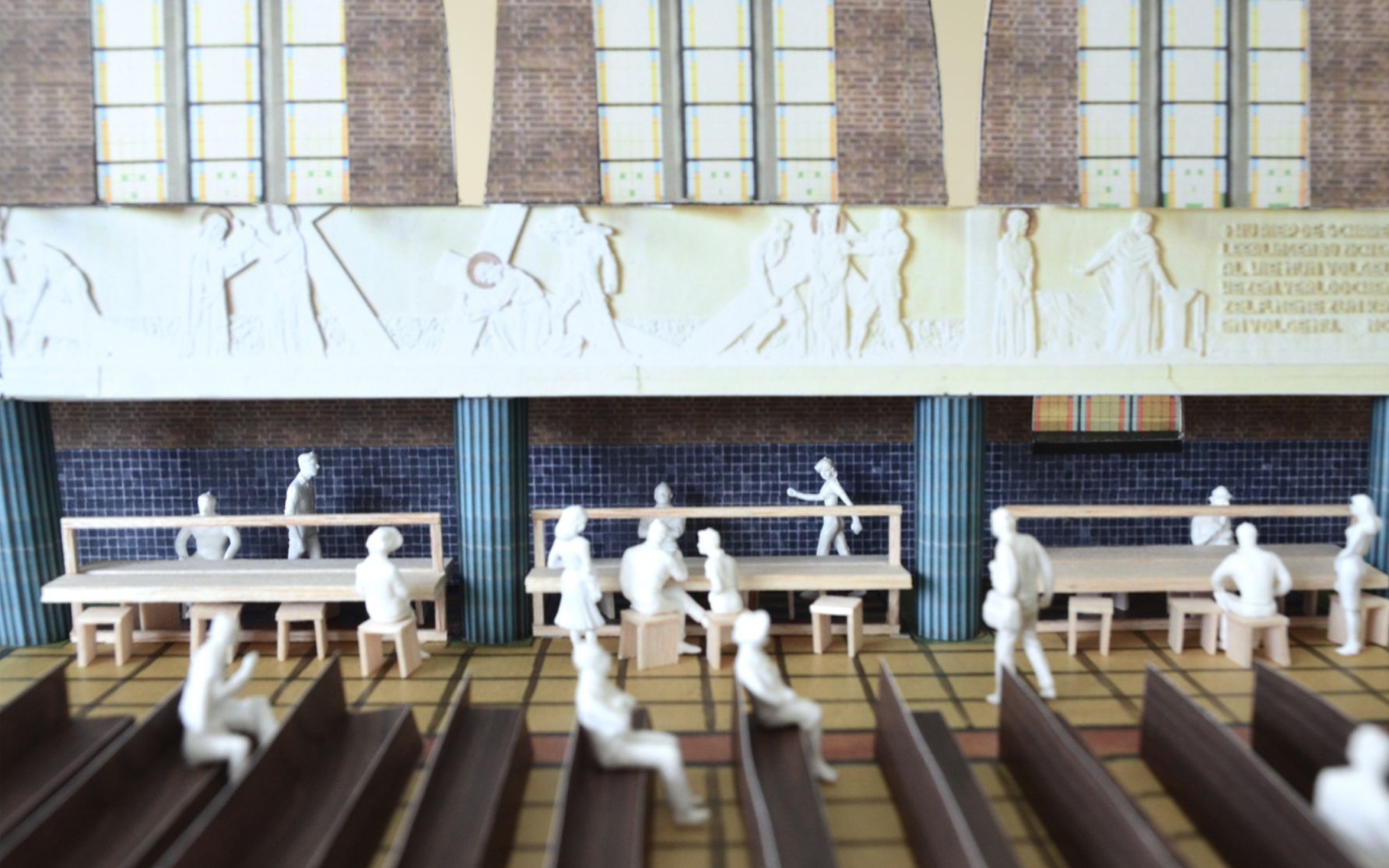 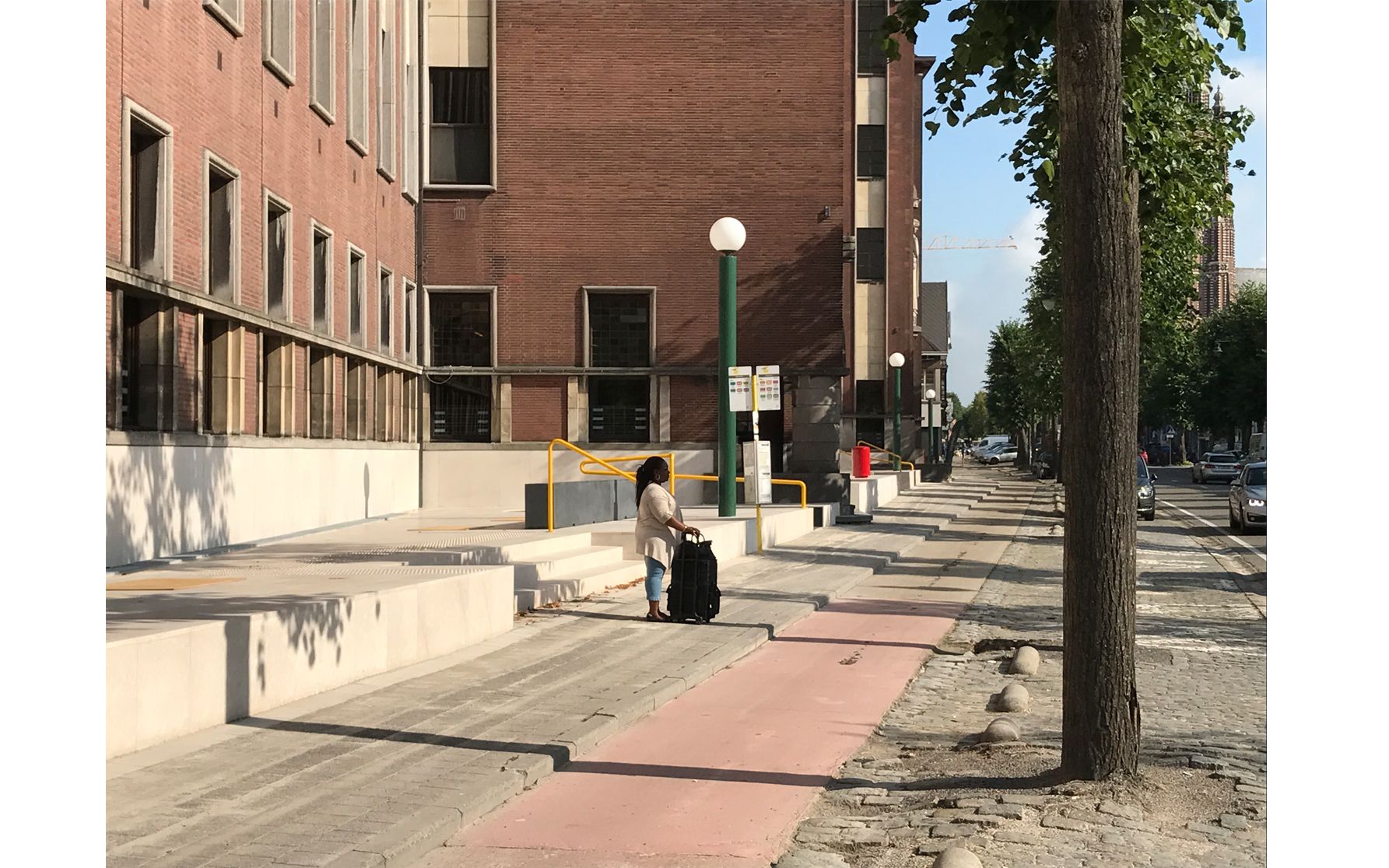 Klein Seminarie (literally translated: Small Seminary) is a school in Hoogstraten that was founded in 1835. The buildings comprise various sections combined into an urban entity: it is both a school in the city as well as a city within the school. In 1933-1934, on the occasion of the 100th anniversary of the school, architect Frans Peeters added a Centenary Chapel, while constructing a new campus.

The current buildings not only represent the local history of Hoogstraten, but also reflect the prevailing educational vision and view on religious practice at that time. Both the front building of Klein Seminarie and the Centenary Chapel are protected as monuments for the sake of public interest, based on the historical value as well as their value in terms of architectural and interior design history. In view of the growing size of the school and the antiquated infrastructure, there is a need for restoration, renovation and reconversion of Klein Seminarie’s front building and chapel. Before appointing a designer, the school governors decided independently that it would be best to link their spatial needs to the existing historical patrimony, instead of making way for a new-build project. Besides agreeing with this justifiable decision taken by the governing body, it also became clear to us during the competition phase that the school campus is burdened by an excess of buildings and open spaces that has developed over time. This analysis turned out to be a real eye-opener for the members of the governing board and created a different perception of the available space.

The assignment has been (and continues to be) gradually developed in mutual consultation between the designer and client, in order to ensure that all the available space within Klein Seminarie is utilised as meaningfully as possible for school and extracurricular activities. This means that the current and future needs of the school are being taken into consideration in greater detail. In practice, this is not as easy or obvious as it may seem, and requires an empathic design process.

Subproject: reorganisation of the area in front of the front building

The new design for the socle adjacent to Vrijheid has been created as a specific response to the thorough evolution of this street as a public space during the last 70 years. Originally, Vrijheid was a public space with hardly any motorised vehicles. This space was mainly shared by horses, cyclists and pedestrians. At that time, there was no separation between different traffic flows as yet, as a result of which a much wider public area was created adjacent to the school. The relatively low speed and low frequency of the vehicles justified the existence of such a shared space. Even for a city on the scale of Hoogstraten, Vrijheid was able to compensate for the lack of a central market square. Hence, there was no need for Frans Peeters to provide for extra public space at Vrijheid at that time.

To utilise the remaining areas between the street and the sober footprint of the Art Deco front building, Frans Peeters laid out a number of modest flowerbeds, in an attempt to soften the austere façades by partly adorning them with greenery.

However, the current state of Vrijheid is completely different. A rapid increase in motorised traffic with a higher average speed has largely displaced pedestrians from the street. In addition, the splitting up of traffic flows has led to a clear separation between bicycle lanes and footpaths. As a result, the public space available to pedestrians at the school has been drastically reduced and become hemmed-in between the green spaces and the bicycle lane and road.

Our architectural intervention seeks to improve this situation by replacing the green spaces with a number of paved areas that will extend the public space towards the front building façade. This public space needs to be extended in order to create a safe area for the large number of pupils who gather at peak times in front of the school, for example, to wait for the bus.

The design respects the original layout of these areas to the maximum by aligning the geometry of the interventions to the geometry of the green spaces provided by Frans Peeters. The colour of the chosen materials is matched to the sumptuous building materials used in the front building and the colour of the greenery at the site. The new socle remains respectfully low in relation to the existing façade, thus emphasising the general appearance of the building in relation to Vrijheid.

The chapel has always functioned as an urban development catalyst for both the school and Hoogstraten, a link between external and internal users. Lectures and reflections for students were held regularly in the chapel. Eucharistic services were held on weekends. The chapel was also used for non-religious activities such as musical shows, theatre performances, academic sessions and celebrations. From the beginning, by opening up and organising the social activities for families and pupils in their chapel, the school also effectively opened its doors to the residents of Hoogstraten.

However, in contrast to the front building, the function of the chapel is now diluted. For example, it is hardly used for school activities anymore and the Eucharistic services are thinly attended. This is only expected to worsen in the future, so the question remains: ‘What to do with the chapel?’ Due to wave of secularisation within the school community, the protected school chapel has hardly been used in recent years. The ‘mental’ decay had already set in, which also hastened the speed of the physical decay.

It is obvious that the chapel is less susceptible to modifications, alterations, etc. However, it is a very beautiful open space that can be used in a strategic manner. Its unique location and distinctive character make it suitable for many purposes. It is simply a matter of making the right choice. The opening-up of the chapel can be viewed from different angles. From the perspective of the school, as part of their study rooms, playground, classrooms, logistics, etc. From the perspective of the community, as a centrally located, accessible, indoor space for performances, cultural events, lectures, as an auditorium, etc. The possibilities are endless, they just need to be discovered, and that’s what this project aims to do.

Before starting on a thorough restoration, we worked together with the client and users to test the multi-functional use of the chapel via a one-on-one design study. This was mostly done by trying out various activities. Not just a design off the drawing board, but a shared exploration of the possibilities. Our initial suggestion – as architects – of using the space as a quiet study area was further elaborated in collaboration with the teachers and students.

For one week, the pews were moved aside or entirely removed and the space made available for new school activities. In this way, various initiatives could be accommodated inside the cleared chapel: from a capoeira session to a lie-down concert, from a game of checkers on the floor to a fashion show for high-visibility clothing. This became almost a literal application of engaging with and appropriating architecture through shared experiences and creations. This ‘instant’ use will be used as a tool within the design study.

Even though this intensive and multi-functional use occurred only for a short period of time, its effects continue to be felt. It has led to discussions about a possible use of the chapel as a municipal cultural centre and it has been agreed that a teacher will set aside a few hours to prepare an activity calendar for the chapel. The chapel was rediscovered as a space for poetry, film, media, dance, music and visual arts. Moreover, the residents of and visitors to Hoogstraten are once again welcome to visit the chapel and the school campus.

This part of the project concerns the restoration of the exterior of the front building. This includes restoration works to be carried out on the roofs, façades and exterior joinery. An important part of the study process focused particularly on the exterior joinery sections, since the historical joinery no longer met current and future needs in terms of heating, acoustics and general usage. In close consultation with the Flanders Heritage Agency, it was decided that the historical joinery of the ground floor would be restored, and the joinery of other levels, where the classrooms are located, would be refurbished in keeping with the historical look but by taking into account current heating and acoustic requirements.

We are currently working on a trial setup of one level of the front building, where we will create five new classrooms and a wide corridor extending from the classrooms that can serve as a common space. This trial setup is the result of a participation process that we have initiated in collaboration with the school board and teachers.

The interior of the entire front building will be addressed at a later stage.